Many dogs that have seizures enjoy long, normal lives with nominal side effects, but not always. In some cases, seizures may cause brain damage, affect other body organs, or result in death. The chances of experiencing serious side effects increases if your dog’s seizures become more frequent or are prolonged.

When a dog has a seizure, abnormal electrical activity in the brain causes a rise in body temperature. When the episode only lasts a few minutes or less, the effects are minimal. However, if dogs have prolonged or repeated seizures, the elevated body temperature can have devastating effects on your pup.

Can seizures kill my dog?

Simple seizures that occur infrequently usually will not kill dogs, but when a dog has one or more seizures lasting more than five minutes without sufficient recovery periods(status epilepticus), the story is different. Let’s consider these cases:

Generalized seizures in dogs can result in death, particularly when the seizures are prolonged or continual. In a 2022 study, data from 124 dogs that experienced status epilepticus was evaluated. Nearly 30% of the dogs died or had to be euthanized as a result of the seizure activity. Of the surviving canines, 27% experienced a recurrence of the condition.

Because dogs with an epilepsy diagnosis usually have two or more seizures in a month, they are more at risk for entering status epilepticus or suffering severe side effects from seizures. A 2014 cohort study of insurance records for over 665,000 dogs from 35 breeds in Sweden revealed that dogs lived an average of 1.5 years after receiving a diagnosis of epilepsy.

3. Dogs with focal or psychomotor seizures

Evidence suggests that survival rates for seizures are not dependent on the type of seizure (general (grand mal) seizures versus focal seizures).

Signs that your dog’s seizure is life-threatening

It’s an emergency. The rise in body temperature can damage the brain or other organs and cause death if you don’t seek immediate care.

Although dogs can have a single seizure and never have another one, it’s extremely rare. Usually, once a dog has a seizure, he’s more likely to have more, and the frequency and severity of episodes tend to increase over time. About 40-60% of dogs that have epilepsy will experience cluster seizures or status epilepticus seizures in their lifetime. So, even if your pup has mild seizures right now, they may progress to life-threatening convulsions in the future. That’s why it’s imperative for you to work with your veterinarian to monitor and treat your dog’s epilepsy.

With a mild seizure that’s not life-threatening, dogs will progress through all the seizure stages in order. Dogs may pace around, drool, or whine in the aural stage.

In the ictal phase of a mild seizure, your dog may:

With grand mal seizures, there is usually a loss of consciousness and thrashing of the legs and head. As long as the ictal phase lasts less than a few minutes, it’s generally not life-threatening.

The post-ictal phase or recovery period may involve pacing, confusion, and temporary blindness. It may last from 30 minutes to several days.

What is the impact of seizures on dogs?

In most cases, seizures are short-lived, so they have minimal effects on your pooch. However, the impact of each episode compounds over time. So, even brief convulsions can cause cumulative brain damage in the long run. However, the main side effect of short seizures is an increased likelihood of future episodes.

When a seizure is prolonged for five or more minutes, your pup’s body temperature rises to dangerous levels. This can place stress on the organs and cause brain damage.

Dogs in status epilepticus for 30 or more minutes are likely to suffer permanent brain damage. Usually, these animals will have changes in behavior or memory loss. As a result, your pooch may not remember his house training. More serious effects include coma or heart attack and death.

Do seizures shorten a dog’s lifespan?

Whether seizures affect your dog’s lifespan depends on the type and frequency of seizures. Focal seizures generally have minimal impact on the lifespan unless they progress to general seizures

Dogs diagnosed with epilepsy generally have a shortened lifespan. The average survival time from the first seizure is 2.07-2.3 years. Factors affecting life expectancy include

When should I put my dog down if he has a seizure?

The decision to put your dog down if he’s having a seizure can be difficult. Work closely with your veterinarian to assess your pal’s condition and make the best choice for his welfare. Indications that it may be best to euthanize your furbaby include:

Learn more with our article: Dog Seizures: When to Put Your Dog Down

What should I do after my dog has a seizure?

After a seizure, your dog may be confused and temporarily blind. To protect your pup:

Do dogs stop breathing during a seizure?

Some dogs will temporarily stop breathing during a generalized seizure. If they do, they may whine, chomp their jaws, paddle their legs, or whine about 10-30 seconds later.

How long does it take for a dog to recover from a seizure?

It can take 30 minutes to several days for your dog to recover from a seizure.

How can I prevent my dog from having seizures?

There are several things you can try to help prevent seizures in your dog: 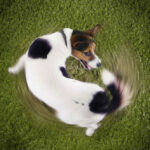 Causes and Signs of Psychomotor Seizures in Dogs - A colleague of mine recently shared an intriguing case with me. The owners were concerned… [...]
9 Dog Breeds More Prone To Seizures [Vet Advice] - Seizures in dogs are caused by an uncontrolled burst of abnormal electrical activity in the… [...] 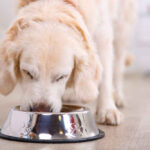 Can Food Cause Seizures in Dogs? A Vet Explains - Seizures happen when normal brain functions are disrupted. We often don’t know what causes a… [...]

Focal Seizures in Dogs: A Vet’s Guide for Dog Owners - “Doc, I think my dog is hallucinating,”  began the call of one of my clients… [...] 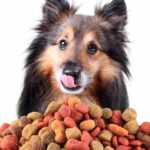 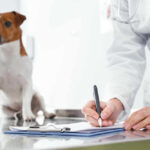 A Dog Owner’s Guide to Grand Mal Seizures in Dogs - In this article, we’ll explain grand mal seizures, discuss the symptoms, and describe how you… [...] 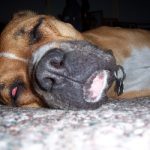 Old Dog Seizures: Our Veterinarians Explain What to Do - A variety of medical conditions can cause older dogs to experience sudden seizures seemingly out… [...]