With October being breast cancer awareness month, it seems fitting that we shine some light on a similar issue found in dogs. Not only are dogs capable of developing breast or mammary cancer, they do so at an alarming rate, especially if they’re left intact. Take a look at these numbers-an intake female has around a 23-34% chance of developing a mammary tumor during their lifetime. Those are not good odds. Fortunately, early detection and treatment will greatly improve her outcome.

This article will help you get familiar with what dog mammary tumors look like so that you can get diagnosis and treatment early on. We’ll also dive into treatments and prognosis.

What are Dog Mammary Tumors?

Dog mammary tumors are lumps that come from the mammary tissue along a dog’s belly. Most female dogs have five sets of mammary glands that extend from the groin to their armpits. They can develop tumors in one or more glands or in the entire mammary chain on one side.

Mammary tumors in dogs may vary in the size and shape. They may also appear as a singular lump or multiple lumps along the same side. Dogs may also have both benign and malignant tumors at the same time. The only way to tell what type of mammary tumor a dog has is with a biopsy.

Benign mammary tumors in dogs are usually small, firm and well defined. You may notice a small lump while petting your dog’s belly, as showcased on our picture below:

Malignant mammary tumors may be small, large, a single lump or multiple lumps. They often have bumpy edges and are tightly fixed to the skin or underlying tissue, as shown below:

Some malignant mammary tumors in dogs may ulcerate or rupture, creating an open wound on a dog’s belly, as seen on the picture below:

What Are the Symptoms Seen with Dog Mammary Tumors?

Most of the time, dogs with mammary tumors are going to be feeling fine. They will eat and drink normally and have a normal activity level. The first sign that owners note is feeling or seeing a lump on their belly. Occasionally, the groomer or even the vet will find the lump on a routine exam.

Mammary tumors can be small and singular, or large and multiple. They may be easily moveable or tightly adhered to the body wall. There may be a little discharge from the nipple that’s associated with the affected gland or the lumps may become ulcerated or even rupture. This may create bleeding or oozing sores on your dog’s belly.

In cases of malignant mammary cancer where the cancer has spread to other areas of the body, you may see enlarged regional lymph nodes, weight loss, vomiting, not wanting to eat, and difficulty breathing.

Intact females may develop temporary lumps in their mammary glands as a normal part of their cycle. These lumps, called mammary hyperplasia, will come and go two or three times a year or however often they come into heat. However, if you just noticed a new lump in or around your dog’s mammary glands, you’re better off to have it checked by your vet.

The treatment for mammary tumors, both benign and malignant, is removal. If your pup has multiple tumors affecting more than one mammary gland, this will be quite a surgery. Set up a cozy spot for them to rest and recuperate.

This goes more for prevention of mammary tumors, but obesity in puppyhood has been linked to an increased incidence of mammary tumors later on. So, be sure to keep your female puppy healthy and active by feeding them a high-quality diet meant for their age and lifestyle.

For dogs with ulcerated or bleeding tumors, you may put a light bandage over them to keep them clean and prevent your dog from licking it too much and causing more problems until you can see the vet.

Dog mammary tumors will require veterinary treatment. There is no at-home remedy that will make them go away, with the exception of mammary hyperplasia. If you notice a new lump or bump on your dog’s belly, your next stop should be to see your veterinarian.

Your vet will start with a thorough exam, including when you found the lump and whether or not it’s grown. They’ll also be interested in other signs, such as weight loss, appetite, vomiting, etc. The next step is to take a sample of the tumor using a fine needle aspirate or biopsy. This will give your vet an idea of the cells that are making up the tumor.

From there, bloodwork, x-rays or ultrasound may be used to determine if the tumor has spread to other areas of the body. If not, it’s time to plan the treatment.

For nearly every mammary tumor, surgical removal will be the treatment of choice. Tumor removal requires a large area to be resected and may involve removing multiple glands. For benign tumors or malignant ones that haven’t yet spread, removal is often curative. However, there is the chance for reoccurrence. For tumors that have already spread, you’re looking at a discussion about quality of life and whether or not surgery is the right option. Consultation with a veterinary oncologist may be recommended. However, there is currently not a great chemotherapy or radiation protocol for mammary cancer.

Dogs may also get anti-inflammatory medications to help control certain types of mammary tumors. Spaying at the time of tumor removal may also be encouraged to help further prevent future tumors from forming.

The cost for treating dog mammary tumors is going to range depending on how many glands have to be removed and whether or not a spay or chemotherapy is done as well. Look to pay $500 or more for a single mammary tumor removal and upwards of $1,500 for multiple removals. Read our article about costs of removing mammary tumors in dogs.

What You Should Know Before the Vet Visit

Your vet’s going to want to know when you noticed the lump and if it’s changed or grown since you first found it. They’ll also want to know how your pup is acting otherwise. Be sure you can tell your vet if your dog is having trouble breathing, not eating, vomiting, or losing weight.

If you can, bringing a urine sample can help streamline the process. Your vet might want to do a urinalysis to check if other organs are affected which could indicate that the tumor has spread.

Most dogs will go home the day after mammary tumor surgery. Vets will like to keep them overnight to make sure bleeding and pain are controlled. Expect them to have a monster of an incision, especially if multiple mammary glands were removed. You’ll want to keep a close eye on that incision to check for swelling, redness, discharge, or an odor.

You’ll also want to keep your dog quiet so they won’t rip any stitches out by running and jumping. Some dogs may also need an E-collar or soft cover to keep from over licking or chewing on the incision. Antibiotics and pain medications will also be prescribed.

Early detection and treatment will provide the best outcome. The smaller the tumor is, the more likely it will all be removed and the less chance it has of recurring and spreading. Unfortunately, about half of all dog mammary tumors are malignant and about half of those reoccur or spread to other organs within a couple of years.

Dogs with benign tumors or malignant ones that haven’t spread and are completely resected are most often cured without further treatment.

How Much Does it Cost to Remove Dog Mammary Tumors?

The cost to surgically remove dog mammary tumors is going to vary depending on the number and size of tumors. Small, singular tumors may be removed for as little as $500, while larger, multiple tumors may cost $1,500 or more.

The life expectancy for a dog with mammary tumors is going to depend on the type of tumor, the degree of spread, and any treatment. Benign tumors can be easily removed and not affect life expectancy. Dogs with malignant tumors may live one month or one year or more without treatment, while surgical removal without reoccurrence might be curative. Other dogs will have reoccurrence and even spread to other organs within 1-2 years.

Can I naturally shrink my dog’s mammary tumor?

There have been some natural or holistic treatments for mammary cancer touted. However, before trying any of these treatments, speak to your veterinarian to determine if your dog’s specific diagnosis, meaning tumor type and stage, is one that may benefit from these types of treatment.

Mammary tumors can be uncomfortable or even painful depending on the size. Large tumors can put pressure on the abdomen when a dog lies on their stomach. Malignant tumors can also ulcerate or rupture which would feel similar to having an open wound on the belly. 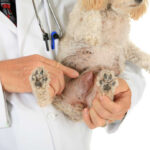 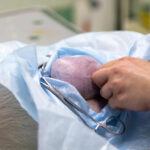 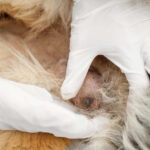 Dog Mammary Tumor Rupture: A Vet’s Advice by Dr Chyrle Bonk, Veterinarian - Since dog mammary tumors make up more than 40% of all diagnosed tumors in dogs, it’s something that veterinarians come… [...]

Key insights: For benign tumors or malignant ones that haven’t yet spread, removal (without reoccurrence) is often curative. Benign tumors can be easily removed and not negatively affect life expectancy. Dogs with malignant tumors may […]

✔️Article written by a veterinarian, and reviewed by Dr. Whittenburg, Pet Hospital Director. Mammary tumors in female dogs are extremely common. So common that they make up around 40% of all diagnosed tumors in females (Intact, or […]

Since dog mammary tumors make up more than 40% of all diagnosed tumors in dogs, it’s something that veterinarians come across on a nearly weekly basis. This is especially true in female dogs that haven’t […]