What is Cushing’s disease in dogs?

Cushing’s disease is a relatively common but serious health condition caused by an overproduction of cortisol, a natural steroid in the body, from the adrenal glands. It affects approximately 2 out of every 1,000 dogs each year. Your vet may refer to the disease as hyperadrenocorticism, but it is commonly known in humans and animals as Cushing’s disease.

Cortisol is a normal hormone in the body but causes widespread problems when in excess. It weakens your dog’s immune system, causes muscle weakening and loss, and affects the skin and coat.

Increased thirst and urination are some of the first symptoms owners notice at home before their dog is diagnosed with Cushing’s disease. You may notice you are refilling the water bowl more often, or your dog needs frequent bathroom breaks. Of course, these symptoms don’t always mean Cushing’s; other diseases like diabetes or kidney disease can cause them too.

However, dogs with Cushing’s disease will almost always exhibit these symptoms, often to the point of having accidents in the house, even when fully potty-trained.

You may also notice that your dog’s skin feels and looks thinner, especially on the belly. This is because the excess cortisol breaks down specific proteins in the skin and muscles, causing them to weaken. This results in a sagging abdomen and swayback appearance.

Along those same lines, you may have also noticed that your dog’s once fluffy, thick coat is thinning too. This can be just the belly or affect almost the entire body except for the head. The appearance is often different than hair loss from infection or parasites, as there is often no crusting, discharge, or redness.

Dogs with Cushing’s disease can develop a skin condition called calcinosis cutis, which appears as raised bumps on the skin. They can range from red to white to yellow. The skin can improve once the dog is under treatment for Cushing’s.

Dogs with Cushing’s disease are prone to recurrent skin infections due to the immunosuppressive effects of steroids. These dogs are more at risk of developing infections since the skin is weaker and less of a protective barrier. Steroids can also delay the healing of current infections or wounds.

Panting is normal if your dog has been exercising or has been outside in the heat. A stressed dog may also pant heavily. However, if your dog is panting more than expected or at seemingly abnormal times, it may be due to Cushing’s disease.

There are a few factors that may cause panting in affected dogs. Often, Cushing’s disease causes increased weight and fat deposits, so the dogs physically have a harder time breathing. They also can sometimes have enlarged livers, which push against the diaphragm and make each breath require a bit more effort. There is some evidence in humans and dogs, though, that cortisol causes panting by stimulating specific receptors in the brain.

Cushing’s disease results in the body’s overproduction of natural steroids like cortisol. Cortisol stimulates appetite, whether naturally produced in the body or ingested in other forms.

Increased appetite is a known and common side effect when taking steroid medications or in diseases that overproduce cortisol, such as Cushing’s disease. For example, many human patients taking steroids for immunosuppression after organ transplants often note a considerable increase in appetite; the same is seen in dogs on steroids for various diseases.

Many diseases may cause your dog to be lethargic, but it is worth seeing a veterinarian if you notice lethargy and any other listed symptoms. Your vet may want to start testing your dog for Cushing’s disease.

The pot-bellied appearance of a Cushing’s dog is often seen later in the disease process (unlike the increase in thirst and urination often seen in the beginning). It is also one of the most easily spotted symptoms that might clue your vet into your dog’s diagnosis.

The pot-bellied appearance may be due to internal organ enlargement, like in the liver. Weakened muscles in the back and abdomen also contribute to the swaying back and enlarged abdomen appearance.

You can view another good picture here.

Is it Cushing’s disease or is it something else?

Specific symptoms, such as the pot-bellied appearance, may seem obviously related to Cushing’s disease, while others, like increased thirst, can be due to various conditions. This sometimes makes diagnosis challenging; your vet may need multiple tests to check other organ functions.

When to call your veterinarian

Sometimes diseases don’t show their symptoms all at once; it isn’t until an owner hears about the disease that we start to put the puzzle pieces of symptoms together. A mild increase in thirst may not be serious, but if it is ongoing or worsens, it may be time to call your vet. The same thing with weight gain – a few pounds may not be a big deal, but if you notice a swayback appearance, it’s probably time to schedule an appointment.

If you find that your dog has multiple symptoms on this list, he may have Cushing’s disease. The good news is that Cushing’s disease is often not an emergency. It is a serious disease, so the sooner you get your dog to the vet once you notice symptoms, the better the possible outcome for treatment.

Unfortunately, there isn’t much you can do at home first. Keep in mind your dog may not be feeling like himself. He probably doesn’t mean to upset you when he has an accident on the floor, even though he’s fully potty-trained. And he isn’t trying to drive you crazy filling his water bowl – he can’t help the thirst.

Your vet will probably need to do multiple tests to diagnose Cushing’s disease. They will often do routine bloodwork to assess the whole body, including kidney and liver, in case of other complicating conditions.

Then there are a few specialized blood tests they will likely need to do once they have done the screening bloodwork. These tests are more specific to Cushing’s disease. They are often repeated once the dog is diagnosed and started on medication to treat Cushing’s.
According to one pet insurance company, diagnosis of Cushing’s disease can range from $500-$1,500. Treatment will vary depending on your dog’s size and response to treatment but can range from $50 to $200 per month. 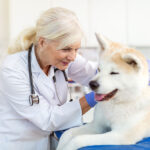 What is My Dog’s Life Expectancy With Cushing’s Disease? A Vet Weighs In - Essentially, Cushing’s Disease is a hormonal imbalance. Let’s start with how things normally work. The… [...]
Signs that Your Dog is Dying from Cushing’s Disease - ✔️Article written by a veterinarian & reviewed by our director Dr. Whittenburg, on Jan 2nd 2023. View… [...] 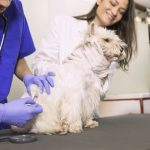 When to Euthanize a Dog with Cushing’s disease? [Vet Advice]

Making the decision to euthanize a dog with Cushing’s disease is not an easy one to make; due to the slow progression of the disease we, as vets, often form strong bonds with affected animals […]

What is My Dog’s Life Expectancy With Cushing’s Disease? A Vet Weighs In

Essentially, Cushing’s Disease is a hormonal imbalance. Let’s start with how things normally work. The pituitary gland produces a hormone called ACTH, which stimulates the body to produce cortisol. When there is enough cortisol circulating […]

Signs that Your Dog is Dying from Cushing’s Disease

✔️Article written by a veterinarian & reviewed by our director Dr. Whittenburg, on Jan 2nd 2023. View our Editorial Process. Making the decision to euthanize a dog with Cushing’s disease is not easy;. Due to the slow progression […]