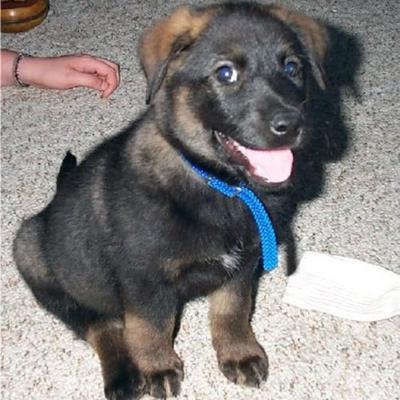 Eevon came to me from a pet store at 2 months old, my aunt’s bought her for me for my 16th birthday and the funny part is we were all told I was getting a small dog like a rat terrier.

She was small as a puppy with nice sized paws and so much thick fur. We slept together, went for “walks” together (she walked by 2 houses and collapsed in the yard so I carried her most of the time.) By 6 months she was pretty, very fluffy and NOT small at all. She was sold as a Norwegian Elkhound mix and I always saw some German Shepherd in there as well.

She was so vocal and always let you know exactly what she wanted and that she wanted it NOW. It drove my parents and sister crazy. She ran out the door at the first opportunity she got for a fun game of chase Eevon through the neighborhood, she stole countless loaves of bread off the counter, ham steaks off plates, a dozen cookies off the dining room table (even tried to put the chair back to hide the evidence), head butted my closet door open to eat my Easter candy and got into the trash so much we moved the can to the back porch.

She also learned to sit pretty (sit up), tell me (speak), whisper (speak softly) and lay down from my sister’s older Dalmatian. She learned high five and shake from me. She would do ANYTHING for food or treats. She developed a wonderful bond with my dad, she loved eating his chocolate covered cherries whenever he got them and he always seemed to think he put them someplace she wouldn’t get to them but he was very wrong. She loved to get in his lap and force him to lay back in the recliner while he was reading a magazine so that he could hold her easier and moved his hand to pet her.

When he was diagnosed with cancer and was sick she always wanted to be near him. After almost 2 years of battling the disease he passed away and she felt it just like we did. She laid in his wheel chair, on his hospital bed in the living room and we mourned together. His passing changed her just as it did all of us and we had to kind of get to know each other again. She developed dog aggression with the other two dogs in the house and that took a lot of time to sort out. We went to the lake for walks and she loved to watch the ducks. We went to a walking trail around 5 in the morning and she would always sniff out deer tracks and I think if I had left her to follow them she probably would have found them!

At the age of 8 she became terrified of thunder storms and would shake so much her teeth would chatter. At 14 she was diagnosed with arthritis and started having problems with mobility. Through all those years even with arthritis she was stealing bread from the kitchen counters and going upstairs to lay on my bed and roll on my pajamas (even wearing a bra on her head.) She demanded dinner at 9 and 6 (she later changed it to 8 and 4:30/5.) She would heard me to the snack cabinet and bark at me “I want a snack! I know you brought in chicken jerky and pork chews!!”

Sadly in November of 2017 she had lost 12 lbs in 4 months and was unofficially diagnosed with cancer. I than had to start thinking of her end of life care and that was the hardest thing I would ever do. She had developed severe anxiety every time I left the house and had gotten so upset she soiled herself. I started making her a bathroom schedule to train myself to make sure she got out when she needed to go out and that started to lessen the incidents along with watching how long I was gone. I tried digestion enzymes with probiotics which seemed to really help put pep back in her step and she did wonderful until December 11.

After coming home from the store and was panting and shaking horribly. I had thought she had gotten over stressed, the next day she slept, the day after she slept as well and the day after she was only walking in counter clockwise circles, barely walking had to have assistance always, couldn’t sit herself up when laying on one side and curling her body in on itself which she had no control over laying on the other side. Sadly December 22,2017 I told her I loved her and I always will. I kissed her over and over. I held her tightly against myself to keep her calm and comfortable and I had to say goodbye.

It’s been close to 3 weeks and my whole world is emptier without her here. My life is quiet and I don’t know how I will live without her. Every day there is a huge hole, I still can’t empty out that last bit of food from her bowl and i find myself waking up at 4 in the morning waiting for a voice that I won’t hear again. We used to watch k9-5 on animal planet every Sunday we talked about all the different jobs she could do, i always thought she would have been perfect for a therapy dog but she always liked the taste tester at fancy restaurants idea (who knew?.

She never didn’t do either of those jobs but she had the greatest job in the world. Being my best friend, she was my baby, we laughed together, we cried together, we had great days and hard days. We were always there for each other and I’m so thankful for every day i had with her. She made it to 16.8 years old she would have been 17 on April 20th and though I know her mind would have made it she would have fought for me I never wanted her life to be a fight.

She was to beautiful to ever be in any pain and although I’m heart broken I know that she’s happy and when my time comes we will be together again.

What a beautiful heartfelt tribute to a beautiful soul. Your Eevon Rose was a very fortunate girl to have the home and love that she did, and you were all very fortunate to have had her in your lives. I am so very sorry for your loss and know how heartbroken you must feel.

Your love was big enough to spare her pain and suffering and her soul is now free and happy and she’ll be waiting for you in Heaven. For now she will live on in your heart and in your memories and your both richer for having had each other.

God Bless and best wishes for the future. It will get easier. ~ Sue